Are you curious about where might you retire while you are young? That’s easy…Portland, Oregon. My recent visit to Portland was exceptionally amazing and I am so excited to share my experience there with you. 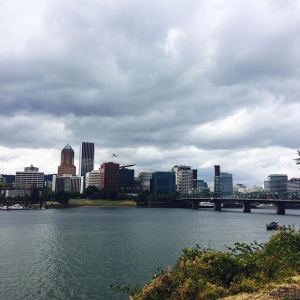 There are several locations. I would recommend going to the one closest to you because they are all equally great and they all serve the same homemade meals. I happened to be at the waterfront so I went to the Pine State located at 2204 NE Alberta St. When I arrived there was a line that wrapped around the restaurant. I generally do not have the patients to wait in line for food, but I happened to be standing next to a really sweet guy who had just moved to Portland who gave me the most amazing recommendations as we waited in line. On that note most people I encountered in Portland were super nice and a pleasure to talk to.

So anyways, when I finally entered inside the store, I saw that there was a window that looked into the kitchen where a man rolled, cut, shaped, and buttered the biscuits in front of you. I thought this was a lovely feature to display to the customers because they showed that their biscuits were truly handmade.

When it was my turn to order I decided to order the famous heart-attack-inducing Reggie Deluxe. The Reggie Deluxe includes fried chicken, egg, gravy, cheese, and the famous homemade biscuit. I also was pleased that they served southern sweet tea. Sweet tea and fried chicken just make such a lovely couple. Furthermore, one of the staff told me that the marmalade jam was to die for, so I ordered that too and I was so glad I did!

As far as seating goes, it was first come first serve and there was also patio seating. Most of the tables were taken, so I ended up sharing a table with some strangers.

When my Reggie Deluxe was served I was so excited to bite into it; especially given that I waited 45-minutes in line on an empty stomach. Upon my first bite I was not able to get everything inside my mouth; therefore, I had to cut it in half and mush it with my hand to make it fit in my mouth.

The biscuit was really amazing. It tasted like a homemade southern buttermilk biscuit: super-flaky on the outside and warm and soft in the inside. I took a piece of my biscuit and ate it with the marmalade jam and OH BOY that was good! As for the fried chicken, it was crispy and golden, but a bit salty…. actually really salty. It tasted like a lump of salt and it just made me really full and bloated. In the end I was unable to finish it and I felt super heavy.

My overall thoughts though were good, I enjoyed the biscuit and the marmalade, but I have had much better southern fried chicken.

BEST PIZZA EVER! Reputable pizza lovers, such as Anthony Bourdain and Rachael Ray, have praised the pies at Apizza Scholls. After dinning with them, I can understand why they have an amazing reputation – it was one of the best pies I have ever eaten.

The greatness of the pizza here is not due to anything innovative or complex, but rather it is due to the simple quality of the ingredients. First the dough is handmade in the kitchen and baked to a crispy-outside and a tender-inside perfection. Second, you are only allowed to add three toppings to the pizza (no more). This is because they believe that a true pizza should be judged based on the bread, cheese, and sauce.

Additionally, it was recommended to me to try the ceaser salad as well and boy was I glad I did. The romaine lettuce was chilled and crunchy and the dressing was creamy and flavorful. It complemented the zesty pizza very well.

As for the décor of the store, it was rather plain. In fact it seemed like it was two stores. You must enter the door on the right to put your name down for a table, and then when your table was ready, you had to exit that door and then reenter the store from the door on the left where you shall be seated. It’s a bit goofy but I get the sense that the owner doesn’t care about the décor but rather focuses all his attention on the pizza, which I actually appreciate because the moment I took a bite of that pizza I felt like I was in heaven.

Overall this was the best pizza in the city.

If you are feeling silly and in the mood for an immature donut, well then head over to Voodoo Doughnut, where they make the weirdest donuts you will ever lay your eyes on. This donut shop looks like a dusty old magic shop. It is decorated with crazy gizmos and gadgets all over the place – even the walls outside the shop are painted with glitter. 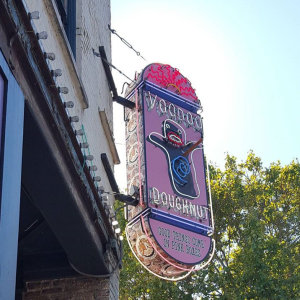 The donuts itself come in all sorts of shape, color, and toppings. Some silly donuts include a blunt donut, a penis donut, and even a voodoo doll donut. They make for fun pictures with friends and a great story to tell others. 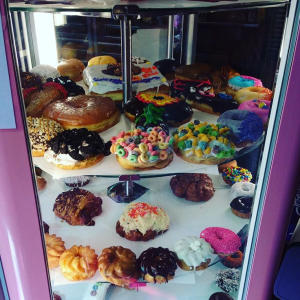 But the donuts do not taste as good as they look. Also this place is cash only, so be prepared to count your dollars because there is no credit card machine to do it for you.

Overall this was a fun place to see. I had many laughs with the staff and I am glad I came here.

Now here is a donut shop that knows how to make good tasting donuts. Blue Star Dounts took a creative spin to your ordinary donut and boy does it taste good.

Some of the scrumptious donuts flavors include: (1) blueberry, bourbon, and basil, (2) valhorona chocolate, (3) dulce de leche & almonds, (4) meyer lemon and key lime curd, and oh so many more.

Similar to Voodoo, these donuts are also fun to take pictures of, but unlike Voodoo, these donuts actually taste delicious. In fact, these are a classic brioche, and have a bit more weight and texture to them unlike the typical Krispy Kreme generic donut. Moreover, the flour is organic Shepard’s Grain flour and they use cage free eggs, which creates an overall organic healthy donut (can I say that?).

If you are in town and near a shop give them a try – just be prepared to wait in line because this donut shop is very popular.

I had an amazing experience and will definitely go back. Also for all you LA donut lovers, Blue Star is coming to LA! It will be in Venice beach on Abby Kinney. Check out instagram @bluestarsocal where you can find my picture reposted on their instagram! Yay!

I decided to check out the Lan Su Chinese garden just because it was close by. Once inside the garden, I forgot about the hustle and bustle of the outside world. I felt as though I had entered in the aristocratic Chinese era. Inside the garden there was a huge koi fish with lily pads and swimming koi fish. There was also a mini water fall and a zen garden. This garden also had a tea room, which faced the pond, where you could enjoy sipping on organic Chinese tea – it just really expensive. When I went, it suddenly rained, which was perfect because it made the garden feel extra spiritual and zen.

I loved it here and will definitely visit it again soon.

The Nines Hotel is located in downtown Portland and comes with an excellent rooftop bar called Departure that has a spectacular view of Portland’s skyscrapers in downtown. Furthermore the room that I stayed in had the view of the courthouse, which looked really majestic at night and day. Also they provided slippers and bathrobes, which were plush and comfy. 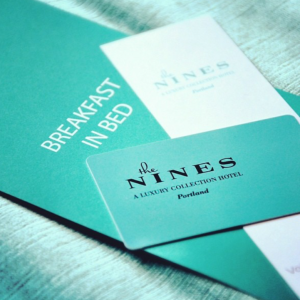 Although the room was pretty and had a great location, the staff on the other hand was completely rude and snobby. For example, on my arrival to the building I entered into the elevator and a bellman followed me inside the elevator jamming his cart into the elevator and hitting my luggage without saying he was sorry. When I arrived at my floor, the bellman rudely said to me “this is your floor, you should get out” but did not move an inch and made me squeeze through the elevator while he starred at me in the most creepy way. This service made me so uncomfortable that I was never comfortable about being in that hotel. I will never go back, especially given that it cost me $600 per night to be treated so rudely.

I do not recommend anyone to go to this hotel.

The public transportation system was honestly the best system that I have ever used (and I have used a lot all around the world). The passes were super cheap and the trains and buses stop every 10-15 minutes. Inside the buses and trains are very clean and air conditioned. Furthermore, the people were not gross homeless people, but rather local prestigious people who were friendly and minded their own business. I also thought that it was really nice that most of the locals would thank the bus driver before they got off the bus.

Overall the public transportation system was really nice and I would recommend the bus and train over a taxi. It’s easy, fun, and safe. 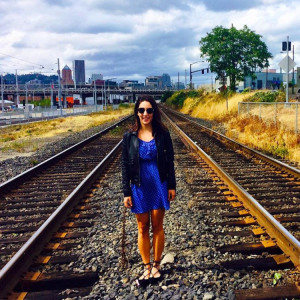 Overall I had a wonderful time in Portland! It was such a wonderful place to visit and perhaps to live in. I will definitely come back and bring more people with me so they too can experience this wonderful place.

Ps – Thank you Kyan for making my dreams come true.