Tulum is a little magical beach town located along the east coast of the Yucatan Peninsula on the Caribbean Sea in the state of Quintana Roo, Mexico. There are 3 parts to Tulum: (1) the beachside resort town, (2) the downtown, and (3) the ruins.

Second, Tulum’s downtown is where all the locals hangout and where you can find the most delicious al pastor tacos, local gift shops, and several hotels and bars.

Lastly, Tulum has several Mayan ruins nearby. The two well-known ruins are (1) Chichén Itzá and (2) Coba – both of which have the most amazing Mayan Temples and the most beautiful cenotes. 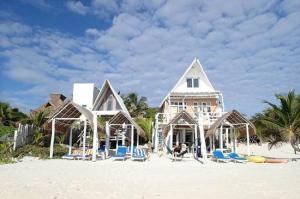 Tulum has several beachside boutique hotels, which most of them look like little tiny bungalows. I stayed at Posada Lamar, which was absolutely spectacular. The rooms over look the ocean and each of the rooms have balconies where you can sit or layout on. This hotel also provides boogie boards and kayaks which was a treat if you wanted to enjoy the water.

(Note: the ocean was full of seaweed which was a bit uncomfortable to get in the water, try to go when there is less seaweed if possible)

My room was an ocean view bungalow with a tropical palapa roof. There was a patio area with a swinging hammock where I spent most of my evenings sipping on my cerveza while listening to music. 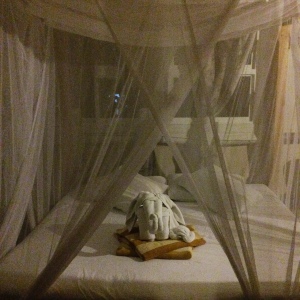 Inside the room, my bed had a mosquito net, which made the ambiance of the room super romantic, and I had several windows (with screens), which I kept open to fill the room with the cool ocean breeze.

The room did not have AC, but I honestly did not need one given the way the room was built to allow the ocean breeze to flow through the room. 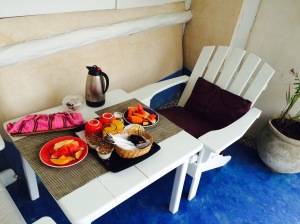 Posada Lamar’s staff was also amazing. They would deliver fresh fruit and coffee every morning to our room and they gave me the best recommendations for restaurants and sightseeing. They would also call the cab for you and speak to them in Spanish if you need assistance.

There were just 2 things that were a bit awkward (which seemed to be common amongst most of the hotels here):

But I ended up loving my naturally curly hair in the end and we worked out a bathroom system, where each one of us had our own “private time” to use the loo.

The “it” hotel in Tulum, is called Coqui Coqui. Initially I tried to get a room here; however, all of the rooms were all booked. Nevertheless, I decided to go there for drinks and to check out the hotel. Here is what I found:

Coqui Coqui was a very nice boutique hotel. The hotel was mostly made out of stone and wood, and they had a pool, a popular spa, and cute shops. However, based on other people’s reviews, the rooms at Coqui Coqui did not have air conditioning, and because the rooms were made out of cement and stone, it apparently became super hot inside. Otherwise, this is a great place to stop by for drinks and/or get a relaxing massage by the beach.

I had the most romantic candlelight dinner at Posada Margarita. This restaurant served fresh, handmade pasta and the most delicious fish. The restaurant is on the beach (literally) and the entire place is lit up with candles, which you can later purchase at the shop nearby.

There was a long wait to get a table, so I would recommend to get there early, but if you have to wait, I then recommend getting a cocktail from the bar. I celebrated my birthday here and I had the most amazing night eating good Italian food and sipping on the most delicious red wine. I can still taste it! 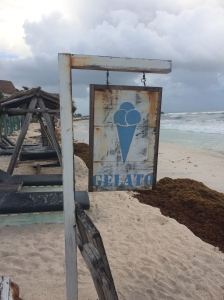 If you come here during the day time, then try the chocolate gelato. It was super delicious and it cooled me down after spending several hours sunbathing under the sun. 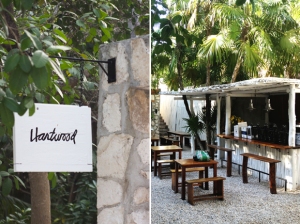 Hartwood is THE restaurant to go to, but unfortunately when I arrived in Tulum, Hartwood was under construction, so I were unable to go. Sadness. But based on other people’s reviews, this restaurant uses fresh and organic ingredients and everything is cooked over natural fire.  I hope to one day come back to Tulum and try this place.

La Cocina de Corina is a little bar/ restaurant right next to Posada Lamar and Posada Margarita. I would go there during the day time and order Coronas and freshly squeezed Margaritas. 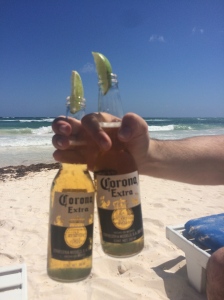 Additionally, the people who work here are absolutely kind. They allowed us to take our drinks to our room next door and to the beach. They even gave us an ice bucket so we can keep our beers cool while we laid out on the beach. I highly recommend this place.

Downtown Tulum was the best place to get Tulum’s traditional al pastor tacos.  I would literally order about 15 tasty tacos for about $10 total.

Note though, unlike American resturants, the local Mayan taco shops do not serve beer, which was a bit of a bummer, but you are able to order the tacos to-go and take them to your hotel where you can enjoy it with a case of beer. 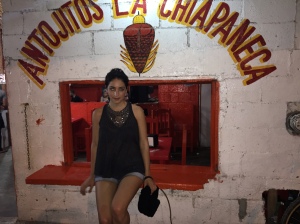 When it came to food, I preferred to go to downtown as opposed to staying in the resort town, because the resort restaurants were incredibly overpriced compared to downtown.

Also try the popsicles! They were soo yummy, especially when it is hot outside. All of the popsicles were made out of fresh fruit and they were super colorful, which made it fun to eat and take pictures of!

There are two well known Mayan ruins near Tulum: Chichén Itzá and Coba.

Chichén Itzá was the famous temple that was built by the Maya people of the Terminal Classic period. The temples there were HUGE; however, they do not allow people to climb up the temples. It was also about 2 hours away from Tulum’s town.

Coba was the other Mayan temple. The Coba temples were also built by the Mayan people, and there were several temples that you can touch, walk, and climb on. The benefit of going to Coba was that it was about 45 minutes away from Tulum’s town, so you can visit the ruins during the day and then enjoy the evening back at the beach!

In addition to visiting the Mayan temples, I recommend seeing the cenotes as well. A cenote is a natural sinkhole or pit that has exposed groundwater underneath.

The Mayans use to sacrifice people in the cenote to give thanks to the Gods.

Today, there are several cenotes near the Yucatan Peninsula, where people go inside to swim and refresh themselves after a hike.

I personally jumped into the freezing waters of the cenote and I would do it again. It was such an amazing and unique experience.  This was an absolute must see!

Overall I had the most amazing experience at Tulum. I truly encourage everyone to visit this magical place!

If there are any questions about your next visit to Tulum, please feel free to email me and I would gladly help guide you!

PS – Special thanks to Kyan for making this birthday dream of mine come true! xxoo